It’s 4 something in the morning and I shoot straight out of bed to the sound of machine guns and explosions going off in the background.

I slowly adjust through the sleepy haze amid the blistering noise to register that I’m back in NY for Memorial Day weekend crashing on the top bunk in my baby brother’s bedroom- finally it dawns on me that the noise is my brother’s alarm going off on his cell phone.

I sleepily scream before rolling over and burying my head in the pillow to drown out the awful noise.

Next thing I know he is in the garden right outside the window…WITH. THE. ROTOTILLER.

It’s a little past 4 in the freaking morning on Memorial Day weekend, for crying out loud!

After slamming the window shut, I promptly go back to sleep.

But he doesn’t. He stays outside working…working…working…all day long like he’s been doing the past several months. He doesn’t want to leave anything undone at the house before he joins the United States Marine Corps. 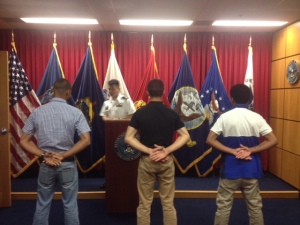 I’ll be honest- it really wasn’t an emotional time at the swearing-in…my brother has wanted to be a Marine since he was in the womb. And I’m not really sure the Marines can make him a Marine because mentally he already is one and has been one- yes, they can shape and mold him and polish that new title for him but he’s been ready since Day One.

If anything, I feel bad for the DI’s on Parris Island– they don’t know how tough a Greek can be especially since our dad was in the Marines, loved every second of it and passed that fiery toughness to us kids. 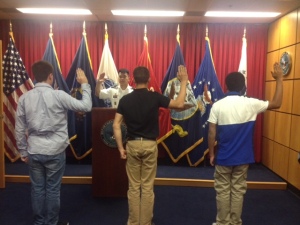 It didn’t get emotional when my Greek mother saw that one of the  newly sworn-in Marines didn’t have any family there and sweetly  asked him to let her take pictures of him and text them to his mom who, turns out, was ecstatic to get the pictures since she couldn’t make the trip… (hmmm wonder where I get my loving persistence from?! thanks Mom!) 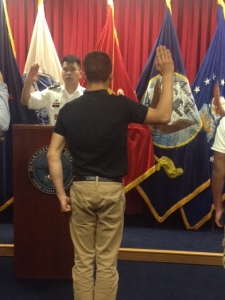 It wasn’t even emotional when my nieces were saying their goodbyes- the 2 year old saying repeatedly,

“Are you going in the reeeeens?”

while the 3 year old was clinging to his legs saying he couldn’t go.

So the time came. We all piled in the elevator- him last carrying the 3 year old still clinging to his one leg and just as the doors were closing, he unclasped her tight little grasp as my sister took her and he stepped out of the elevator and back into the hallway as she let out a piercing scream of

The only sound in the elevator as we went down to the ground floor of the federal building and walked past the security officers and metal detectors was the muffled sobbing and crying of a little three year old girl who would terribly miss her uncle.

And while we adults couldn’t publicly scream and cry along with her… that’s when I would say the day became emotional for all of us.